Copyright: ©2019 Yeon-Koo Jeong. This is an open-access article distributed under the terms of the Creative Commons Attribution License , which permits unrestricted use, distribution, and reproduction in any medium, provided the original author and source are credited

Vermicompost is becoming one of the best organic fertilizers which have an important contribution to agriculture. In fact, it contains more plant nutrients than that of organic compost. The research experiment is focuses on the nutrients present in vermicompost and its important role on the growth and yield of King Chilli, Capsicum chinense commonly known as U-Morok in Manipur. Study was carried out at garden of Life Sciences department, Manipur University, Canchipur, Imphal West, Manipur. Phumdi biomass were collected from Loktak lake, Moirang and Municipal Solid Waste (organic) was collected from Lamdeng Khunou, Lamsang, Imphal West. Vermicomposting of these wastes were done by mixing with cow dung slurry in the ratio 3:1 and precomposted for three weeks. An experiment was conducted for 60 days by using three species of earthworms, Eisenia fetida, Eudrilus eugeniae and Perionyx excavatus. Vermicompost obtained from the above observation were further utilised in plantation of Capsicum chinense. The seedlings of Capsicum chinense were planted in five sets of pots having three replicates each. Two sets of pots were filled with compost and vermicompost of Phumdi, the other two sets are filled with compost and vermicompost of Municipal Solid Waste while the fifth set was filled with soil and kept for control. The experiment was set up and observed for 150 days.The plants were watered regularly for every alternate day. Various growth and yield parameters like mean stem diameter, mean plant height, marketable yield fruit per plant, non-marketable fruit per plant, total plant biomass were recorded for each treatment. The presence of heavy metals (Fe, Zn, Mn and Cu) and nutrients (N, P, K) in the compost, vermicompost and soil were analysed. The plant biomass (dry form) grown in compost and vermicompost of phumdi and Municipal Solid Waste and soil were determined for the presence of nutrients and heavy metals. The nutrients present in the vermicompost were found to be higher than that of compost and soil. Almost all the plant growth, yield and nutrient parameters increased significantly in vermicompost and compost when compared to that of soil or control.

Capsicum chinense is the hottest chilli in the world. It can be grown under diverse soil and climatic conditions. It is widely cultivated in Manipur [1].It has medicinal value and said to be used in the treatment of atherosclerosis, shock, haemorrage, heart attack, etc. King chilli is loaded with vitamins like niacin, pyridoxine, riboflavin, and thiamine. It is also a good source of folic acid. Folic acid helps the body to produce healthy red blood cells and prevents anaemia.

The chemical that causes the spiciness in chilli is capsaicin, which is what creates hot and pungent. Potassium present in King chilli may reduce the risk of heart disease, copper present in it is an essential antioxidant trace element, important for strong bones and healthy neurons. It is rich in Beta carotein which later converts into Vitamin A. Capsicum annuum is rich in Vitamin A, C and E [2]. Vermicompost is a fine granular organic matter with high porosity, aeration and water holding capacity. Vermicompost have higher levels of organic matter organic carbon, total available NPK, micronutrients, microbial enzymes and plant growth regulators [3, 4]. There are reports that concentrations of exchangeable cations such as Ca, Mg, Na, K, available P and Mo in vermicompost are higher than those in the surrounding soil [5].Vermicompost, used as soil additives, or as a components of green house bedding plant container media, have improved seed germination, enhanced seedling growth and development, and increased productivity [6]. Experiments have been conducted on positive effects of vermicompost application on plant growth like Chilli [7], tomato [8], marigold [6], onion [9] and Strawberry [10]. Vermicompost affected positively the growth of Begonias and Coleus [11].Various greenhouse and field studies have examined the effects of a variety of vermicomposts on a wide range of crops including cereals and legumes, paddy, sugarcane and wheat, vegetables like tomato (Lycopersicum esculentum), brinjal (Solanum melongena) and okra (Abelmoschus esculentus) etc. Ornamental and flowering plants [6] and field crops [10]. Thus modern agriculture aims to develop a rich food at a reasonable rate, all The main objectives of the present study were to access the effects of vermicomposton the growth, yield and quality of King chilli plants planted in the experimented pots.

The experiment was carried out in two phases, (i). vermicomposting of MSW and Phumdi were done in the month August-November 2016 and (ii). Pot plantation of king chilli was done during, 16th January – 15th, June 2017, at the Department of Life Sciences, Manipur University, ImphalWest, Manipur.

The samples collected from different places of Municipality solid waste dumping and processing site, LamdengKhunou, Lamsang and Phumdi of the Loktak lake, Moirangwere brought at MU Campus, Canchipur. The waste samples were sorted by segregating and discarding the nonbiodegradable fraction and the biodegradable components were mixed with cow dung slurry in the ratio 3:1 and kept for precomposting for 21 days.On the 22nd day the precomposted substrates of both MSW and Phumdi were taken for vermicomposting and composting by adding five kilograms each to a total of eight sets of earthen pots (4 sets for MSW and 4 sets for Phumdi), each set comprising of three replicates. In three sets of pots, each of MSW and Phumdi, three species of adultearthworms with clitellum i.e. Perionyx excavates, Eisenia fetida and Eudrilus eugeniae; 50 in number, were introduced on the surface of substrate keeping aside the fourth set without any earthworm, for composting. All the pots were covered on the top by jute cloth. The temperature and moisture content were maintained by sprinkling adequate quantity of water at frequent intervals. The harvesting of vermicompost and compost was done on the 60th day. Harvested vermicompost was analysed for bothmacro and micro-elements contents [12]. 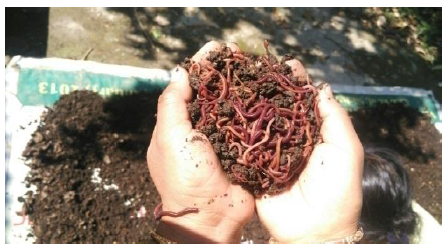 Preparation of soil and vermicompost mixtures

The seedlings were transplanted to the respective experimental pots. Thus the five sets of pots with three replicates each were planted with one plant per pot. Pots were watered regularly and kept for observation for three months. Various growth and yield parameters like mean stem diameter, mean plant height, yield per plant, marketable yield per plant, total plant biomass were recorded. Stem diameter was recorded using vernier callipers. Plant height was recorded using scale. The fruits were weighed using a weighing balance.

Analysis of the presence of N, P, K, Fe,Cu, Zn, Mn on soil, compost of MSW, Phumdi, Vermicompost of MSW, Phumdi is shown in Table 1. Determination of N content was done by Micro – Kjheldal method [13], while P and K contents were determine by UV Calorimeter [14] and Flame photometer [15] respectively. Trace elements like Iron (Fe), Copper (Cu), Zinc (Zn) and Manganese (Mn) were anlysed by the method proposed by Chapman et al. [16].

The experimental data were expressed as ± S.E. 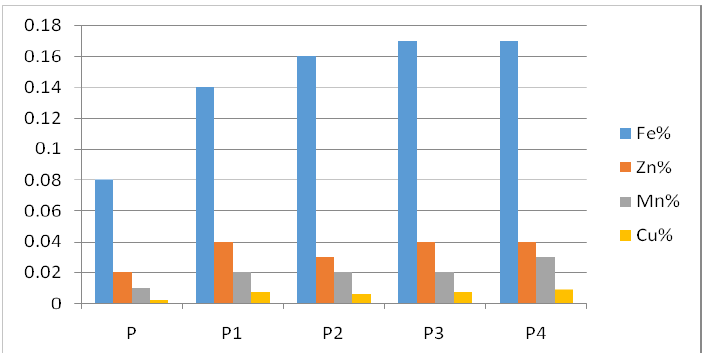 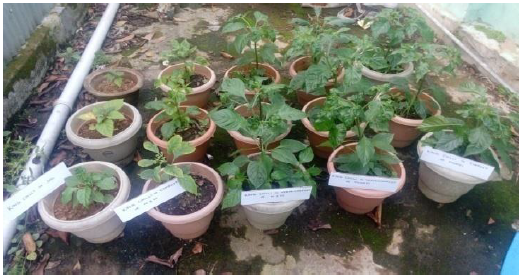 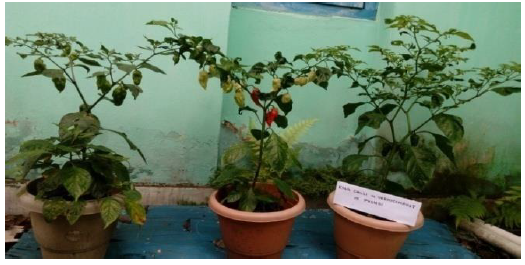 Picture 2:150 days old King Chilli in the vermicompost of Phumdi. 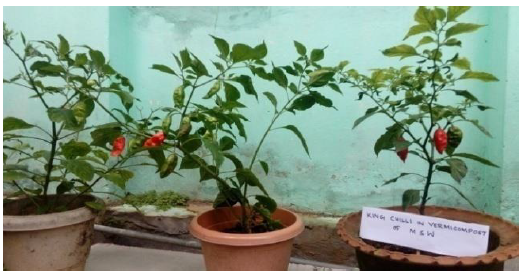 Picture 3: 150 days old King chilli in the vermicompost of MSW.

From the above result, it has been observed that vermicompost have a rich nutrient of nitrogen, phosphorus, potassium, iron, zinc, manganese and copper. The percentage of nutrients are higher in vermicompost when compared to compost. King Chilli plants grown in vermicompost mixed with soil shows highest growth parameters followed by plants grown in compost and soil medium while less plant growth was found in soil. Thus, it can be concluded that application of vermicompost in the soil increases the nutrients in soil and plants shows more growth and produce higher yields. The finding is similar with the findings of Adhikari et al. [17] with their statement that vegetative growth of the chilli plant increases in vermicompost treated plants when compared with compost. To produce crops of high nutritive value and zero chemicals, farmers and growers start using compost and vermicompost in place of chemical fertilizer. This practice should be encouraged by everyone in order to get a rich food at a reasonable rate all the year round.

The authors expressed their sense of gratitude and thankfulness to the scientists and the staffs of the ICAR, Lamphel, Imphal, for providing necessary experimental facilities and valuable suggestions while carrying out the experimental analysis in their labs for writing this paper.